Hock Kee was founded in year 1969 by Mr. Lim Chye Hock (aka Ah Hock). He was a diligent and an ambitious man. With the hard work of Ah Hock, he not only produce and barbecue bakkwa (Chinese salty-sweet dried meat) in traditional way; but also selling "Roti Bakkwa" (Chinese salty-sweet dried meat in sandwich) in front of Odeon Cinema at Penang Road.

With the grace of God, the business of "Roti Bakkwa" grew and developed. Ah Hock set up a few more stalls at Cathay Cinema and Rex Cinema one year later. There are two main reasons the business of "Roti Bakkwa" from Ah Hock rapidly expand. The most important reason is the high quality of his "Roti Bakkwa". As Ah Hock used charcoal to barbecue the bakkwa, therefore,  it is delicious and with distinctive smoky barbecue flavor. The second reason is that it was the golden age of cinema during the past century. 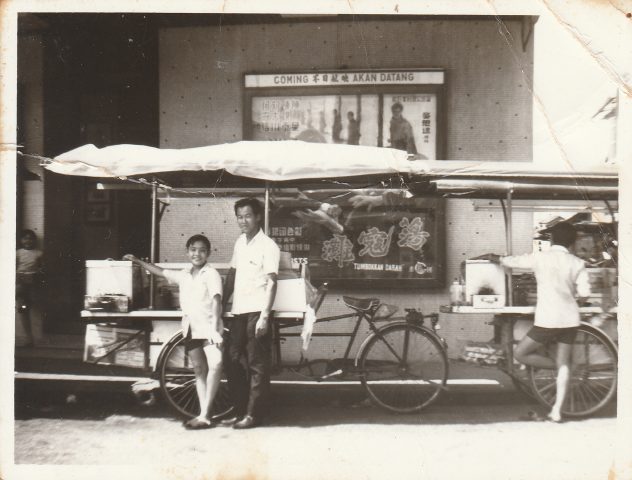 Gradually, with the introduction of video tape, it brought challenges to maintain public interest in cinema. As the business of "Roti Bakkwa" at the cinemas declined, Ah Hock decided to fully focus on bakkwa and meat floss production. Later, he began wholesale bakkwa and meat floss to customers. He also opened a shoplot at Jalan C.Y.Choy. The shoplot was ran and managed by his wife, Paik Choo, while he focused on the production and marketing.

The making of minced bakkwa with traditional round tray.

Charcoal preparation before grilling the bakkwa.

Sadly, Ah Hock passed away in the year 1992. The business was taken over by his wife since then.

With the sudden loss, everything left in ruin as the shoplot need to be abandoned. However, Paik Choo carried the responsibility being a mother of four children and in-charge of the bakkwa business. She worked extra hard to maintain life. Not only she sells bakkwa during Chinese New Year, she also roasted chicken, duck and barbecued pork (Char sio bak) to sells duck rice on usual day back then.

After five decades, she is now personally mentoring her son into the bakkwa business. The baton of the business is passing down to the second generation, their son, Cheng Hai (aka Ah Hai), in the year 2018. Ah Hai starts helping up doing bakkwa since he was 10 years old. In the year 2006, he pursued into engineering course and graduated in the year 2011. He starts practicing engineering and served in one of the well-known automation company in Bayan Lepas, Penang in 2012. Later, he resigned engineering in early 2017 and being a full-time bakkwa maker since then.

The Interpretation (Background) of The Brand

Blessing is what everyone yearns for. Chinese community congratulate each other during the Chinese New Year: Congratulations on your good fortune, the smooth sailing, the blossoming of wealth... Everything comes from blessing, prosperity and success. Also, during Chinese New Year, many families like to put a big "Fu" ("Hock" in Hokkien dialect) on the door, hoping for the new year. Generally, "Fu" ("Hock" in Hokkien dialect) represents blessing, bliss and good fortune.

How to write Chinese character?

The Chinese character "fu" (福) is very simple: On the right is a field （一口田）. China used to be a farming society. If one cultivate his own land, he can either have it himself or sell it to the others, in exchange for salted fish and vinegar then he can live a carefree life. However, if one has no land of his own, he must rent the land from the rich. For interest, he must have to pay double to the rich during the repayment. With this, how can one be blessed with such a burden? So it is very important to have a field of your own （一口田）. But, do not forget the left-hand side of the word (礻), which is our God. In other words, to be with God, in addition to a field, is the true blessed life. **1

Furthermore, people are saying: "It is better to give than to receive." Indeed, those who "give" is more blessed than those who "receive". Because it means one has the ability to provide to the insufficient one.

With this, whenever thinking of blessing (Hock), remember to come to Hock Kee bakkwa. We are blessed by the grace of God and we want to bring this blessing to everyone of you.

Hock Kee guarantee the excellent quality of bakkwa from Ah Hock and Paik Choo to their son, Ah Hai. Hock Kee, hereby, thank you for your trust and support.